Where the hell have I been?!?! I haven't missed more than a day (or two) since I started this blog, then I go 5 days without posting! What gives?! BECK! Beck is the reason!! My most favouritest musician in all the world! The one artist I could never give up, the one I would choose if I had to chose one to listen to for the rest of my life.

And I got to see him THREE NIGHTS IN A ROW!!!! WOOOOO!!! So super frakkin' awesome, I can't even explain.

He played pretty much the exact same sets the first two night, but then switched it up a little for the last. For example, he started with Loser the first two, and Devil's Haircut the last. But he put Loser in during the middle, but started it off with a little guitar solo. Sweet. Also, only on Friday (the last night) did he play any songs I didn't recognise. I'm not sure if they were just from the newest album which I haven't heard TOO many times (though I think I'd at least recognise them) or if they were new, as of yet unheard, ones. That would be nice. But I have no idea.

Anyway, here's some pics from the three nights. He had like a giant Lite-Brite® board behind him that did differnt stuff, like show pictures or giant colour light shows or my favourite, showing him and the band.

This is my view the first night:

Here's the second night. MUCH closer, but also MUCH more expensive. Damn you StubHub! (But TOTALLY worth it!) (And this show I was accompanied by the person who introduced me to Beck in Junior High when I was 12 or 13. Awesome.)

I thought this bit was pretty cool, they all stepped away from their instruments and came up front with little handheld electronic type shit. They played Hell Yes and Clap Hands this way...and something else, I can't remember. 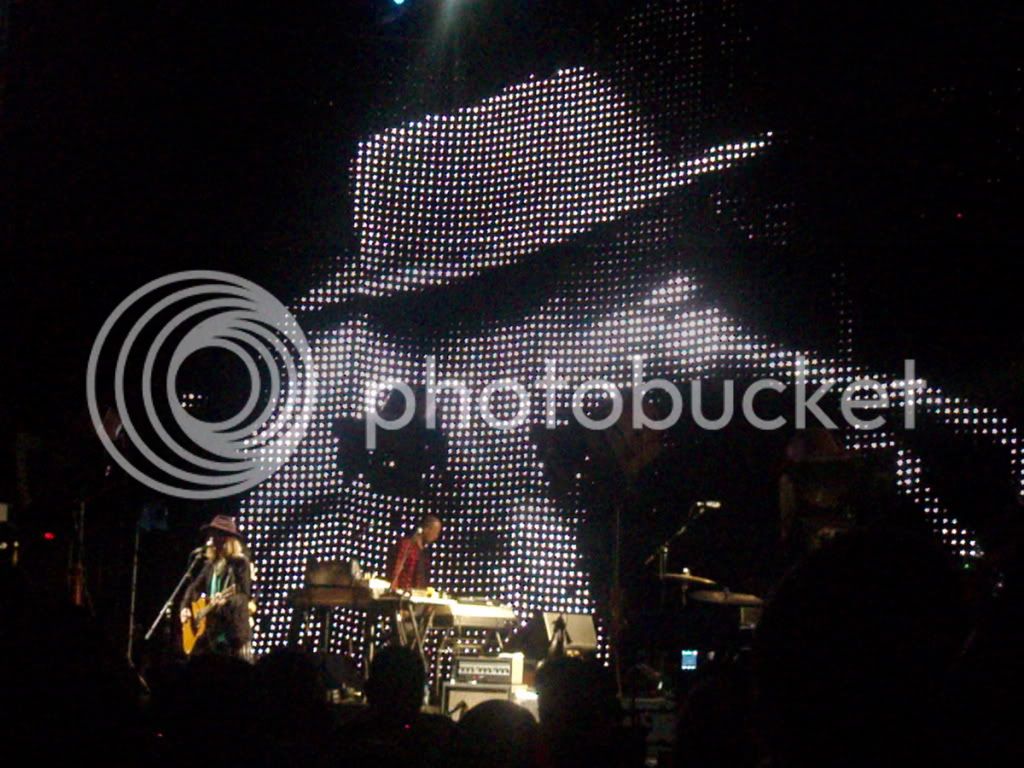 Here's some from the last night, much further away, but still frakkin' awesome. I love him. Seriously. A lot.

Anyway, you can see some of the colour light show-y type stuff!

Lastly, I managed to snag bits of video here and there. Here's him "saying good-bye" after the encore on the last night:

And here's almost all of one of my favourite songs, which I've mentioned before:

I really miss going already, it became my nightly routine! :) (Oh yeah, this was up at United Palace all the way uptown on 175th St. I'd never heard of it before, but it's a really pretty place, very small, and I think it used to be a church!) '

I can't wait until he's back here. I think I have to go to every show he ever plays in NYC. :)

PS As if that wasn't enough, I've been listening to my entire collection of Beck on shuffle all day (and a bit this weekend, as well). :-P
Posted by Jennifer Juniper at 1:26 PM