I keep saying it, hoping it will stop being scary. It doesn't. 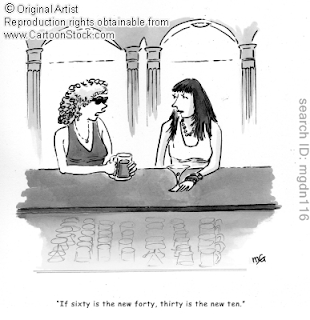 haha I guess it's not so much that I feel OLD as that I'm that much closer to it being over! I know, I know, I have plenty of time (barring a terrible accident, which I like to avoid), but still. THIRTY YEARS HAVE PASSED. And it's not like it FELT like thirty years! I'm not like at this stage thinking, "Whoa, that took FOREVER, man, I got so many more of these years to get through!" That shit FLEW! It's crazy!

I know I'm not the only person in the world to think like this, I'm sure pretty much EVERYONE does. But that doesn't change the scariness for ME. ::sigh::

And yes, part of the scariness is that when it's over, THERE'S NOTHING. It's scary! It's impossible to imaging non-existence, which freaks me out! And before any of you religious-types says some dumbass thing about being right or whatever, here's this: Just because I'd LIKE there to be an after life (though, even that I'm not sure I want, all possible outcomes are kinda scary), that doesn't mean there IS one.

I think that's what's going on with a lot of religious people (I'm saying most or anything, but I know they're out there). They WANT there to be an afterlife, religion COMFORTS them, so they refuse to REALLY think about it for fear of convincing themselves it's not true. But I can't TRICK myself. I can't FORCE myself to believe something I don't. It's literally impossible! And if there WAS a god, wouldn't he be able to TELL that I was faking anyway??

So I guess that's kinda more why I'm scared of being 30. That's thirty years of a relatively short existence GONE. Don't get me wrong, I'm pretty happy where I've gotten myself in those thirty years. I don't think I've not done something by now that I should have. (Luckily I have ZERO desire for children, otherwise I'd be freaking out about THAT too.) I mean, I'd like to have more money and have been able to see more places in the world, but I've still got time for that.

I think this is also why I pack my days full of stuff to the point of exhaustion. I just don't want to waste what little time I have! I don't want to miss out on anything! I don't want to miss out on meeting amazing people and making new friends and doing fun things with all of them. Sure I'm tired all the time, but it's worth it. Though I'd really like some more time to just go home and play video games!! Too bad I have to work! ;-) But I am lucky to enjoy that as well. I'm relatively happy and that's a good thing. But...THIRTY! I seriously can't believe it!


The End.
Posted by Jennifer Juniper at 1:39 PM

all the best Jenn!