OK! SO! After getting home at 4AM, I was VERY lazy on Saturday and didn't make it to the convention until around 5PM. Yes. I spent a mere 2 HOURS at NYCC (not counting my booth shift on Friday) in total. I just went directly to Artist's Alley to hang out with friends and get a few sketches. I managed to get three from Katie Cook, Declun Shalvey & Leandro Fernandez (I don't have them scanned right now, but I'll post 'em eventually)!

Saturday night was also the Marvel after-party, hosted by none other than the famous C.B. Cebulski! I was PLANNING on not staying out too late because I had to be up at 8AM to drive to Pennsylvania the next morning...but I should've known better. Here are the only pics from that night I will share...

And this is me with Scott Porter (of the famous Friday Night Lights that I have to watch soon)!

This guy decided around 2AM that we should turn the party into a karaoke party! It was a great idea. Everyone went nuts and had a fantastic time. I left AGAIN around 4AM, but this party was still going STRONG. Scott was a sweetheart and definitely helped turn this party up a notch. (Also, Brea was so adorable that night when she sang! haha)

So, as I mentioned I had to get up at 8AM the next morning. Which I managed to do (ok, 8:30!). And this is why. For the 8 weeks preceding this day, I had be VERY good about keeping up with the gym 2-3 times a week (a big deal for me as ever since I stopped kickboxing, I've been VERY lazy). What finally got me motivated? THE WARRIOR DASH!

What is the Warrior Dash, you ask? Well, it's an approx. 3 mile race complete with obstacle! There's climbing cargo ropes, schlepping through ICE FUCKING COLD WATER and over logs, climbing up muddy hills, crawling through mud under barbed wire, jumping over fire and MORE. So after 4 nights of drinking and being out late, and about 4 hours of sleep, I took a 3 hour drive to Quarryville, PA to compete in this.

Don't get me wrong, I didn't expect to win. Actual athletes will compete in this. My main goal was to a) FINISH it and b) NOT be the last of my group of friends. And in these two things I succeeded! WOOT!

Yeah, they give you a little finisher medal at the end which was pretty cool. The race was really fun. It would have been MORE fun had I properly prepared for it. I was out of breath JUST WAITING AT THE FINISH LINE. And the hardest part of the whole race was the RUNNING. I HATE running and my stamina is CRAP. Most of the obstacles were fairly easy to complete, but all the running throughout was ROUGH. Also, at about the second obstacle — climbing up and over these truck-like constructions — I jumped down off the second one and really hurt my leg, so I had to go through most of the race with THAT pain (which I'm JUST this week FINALLY getting over). But I made it through in 45 minutes! 7th out of my group of 16 friends! (Approx. 3800th out of 5111 people. haha) The best of us did it in 24 minutes (I have no idea how that's possible! :-P) and the last of us I THINK in like 58 minutes. Still pretty fucking impressive!

Throughout the race, Brightroom Photography was taking pictures of us, this is the only cool one of me that I found from the very end (I really wanted one crawling through the mud-pit under the barbed wire) but I'm not buying it b/c they are RIDICULOUSLY expensive. Jerks. (Hence the copyright logo over it, it's just the preview so you can choose which to buy.) 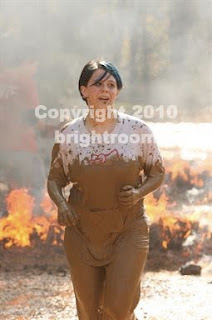 Here's a great group shot someone took of us. So fun. 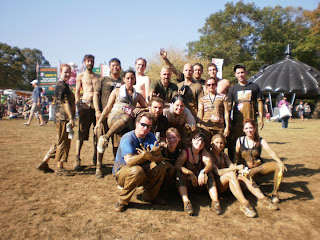 After the race, you get hosed down (though it only does so much) and a free beer. You can also buy more beer and food and stuff. It really is a lot of fun and we're already planning on doing it again next year. This time I WILL GET A GOOD NIGHT'S SLEEP!! :)

Oh and these were my poor knees at the end of it...

So, that being the ROUGHEST part of my crazy-busy month of October, there's still so much more to come! The following Tues, I finally went back to The Comic Book Club (a weekly, live talkshow about comics that's REALLY funny) since my friend Declun was a guest on it and I had been neglecting the show (I used to go very frequently). I LOVE the guys who run the show and since I hadn't been there in so long, I hung out afterwards with them AGAIN a little too late that I should've. Oh well. It was fun.

I then followed it up on Wednesday with a ladies night with some of my favourite ladies. We had a delicious meal at Josie's East with lots of girl talk. I actually made it home at a decent hour THIS time. The other thing to happen to me on Wednesday was my good pal Scott Adsit (who plays Pete Hornberger on 30 Rock) invited me and a friend to watch the 30 Rock live episode from the luxury of the SNL Green Room! I decided to bring Declun because I honestly can't think of a bigger fan of the show (and also because my poor little cousin who I originally asked was out of state and couldn't come).

So then on Thursday we went to the SNL studio (EEEEEE!!!!) and did just that! There was free pizza, sushi, wine, coffee and cookies in there. I saw Brian Williams in there (too nervous to talk to him, he's AWESOME) and watched the HILARIOUS east coast taping of the show on the many big screens they have there.

The guy who runs the 30 Rock twitter account took a pic of our group hanging out in the green room before the taping started and posted it on twitter:

Scott took us around for a tour of the set in between the east and the west coast tapings. We got to meet Tina Fey, Julia-Louis Dreyfus, John Lutz, Jack McBrayer, Bill Hader, Judah Friedlander and more. (I actually have met Tina, Bill & Judah before and they are super awesome.) We then took this awesome picture in front of their fake FOX news set:

Then we went back to the green room to await the west coast taping. We noticed that the screen where we watched the show was just showing the floor of the set (meaning the camera was just sitting on the floor). So when Scott left to go tape the next show, he found it and brought Rachel Dratch to say hello to us:

I have to say, it was pretty hilarious to see that in the room all of a sudden. haha I wonder what everyone else in there thought of that...

Anyway, the second taping was just as awesome as the first and included a couple of little differences that made it fun.

I got a couple more shots of the SNL studio before I left. Here's some retired costumes that are great. That's Church Lady in the middle who I LOVED when I was a kid:

In this very hall, I also met MATT DAMON!!!!!! Just a quick handshake and hello, but that was so cool. He's so awesome.

Part of the 30 Rock set being taken down at the end.

Unfortunately I don't have any pics from what followed but we ALSO went to the after party!!! Free booze, free cupcakes, mini hamburgers and other snack foods, and even free milkshakes!! I met Dot com and Tracy Morgan bumped into me. Talked to Jane Krakowski about the fatty milkshakes and stood there while Alec Baldwin talked to her right over my shoulder (it was very crowded). Had a great time hanging with Scott and his lovely lady Sandy, and also Christina Gausas who is such a doll! (She and Scott do a 2-person improv show at UCB theater called Adsit & Gausas. The next one is 11/10! GO!)

So, yet another late night home, but WELL worth it. I had such a great time and now Declun owes me for the rest of his life. haha I was so wiped out I just spent the entire weekend home playing Final Fantasy XIII, watching TV and knitting. I needed to replenish for the REST of October....