Holy crap! October has turned out to be the busiest month for me! The last two weeks have completely drained me (to the point of just sitting in my room knitting and watching TV this weekend)! And I've still got more to come!!!

OK, first, last Tuesday I went to see Sam Harris talk about his new book, "The Moral Landscape" at The Great Hall at Cooper Union. It was really interesting and I bought the book and had him sign it. His book is basically about the idea that morals CAN be determined by science. Obviously there's more to it than that, but you can just read the book. haha (I've only just started.)

(After the talk I walked over to Luke's Lobster again...holy jeez that shit is DELICIOUS!)

The next night, my super cool awesome pal, Brian Bendis took me to see "A Life in the Theater" by David Mamet, starring Patrick Stewart & T.R. Knight.

This play was great! Patrick Stewart was so great!! So adorable and funny! Funny thing about this play was that it was running in London when I was there in 2005. I really wanted to see it but the people I as traveling with didn't want to, so we didn't go. So it's really cool that I finally got to see it. Only problem is, instead of T.R., it was JOSHUA JACKSON! Whom I love. (WATCH FRINGE!!!) Ah well. If you like going to the theatre, I recommend this highly! This was also sort of the first night of comicon partying, so I went out after this to hang out with some of the creators that already made it to NYC. I tried to make it home at a semi-reasonable hour and left at around 12:30. However, what would normally have been a 40 minute trip home turned into a nightmare with the Q only going to 57th St. (after waiting 15 minutes for it), then waiting 10 more minutes for the N, which then only went to Queensboro Plaza (first stop in Queens) because of an investigation at the next stop. So then I had to take a shuttle bus home. Ugh! Took an hour and a half. Blerg. (Although I was very annoyed by this, I have to say, the MTA was crazy quick with getting those shuttle buses there, so I was very pleased about that.)

Anyway, the next night I went to City Winery to see Fran Healy (the lead singer from Travis) perform. Oh man, I love that guy!!

City Winery is a really cool place. I had a fancy cheese plate. Soooo gooood.

He was just so cute the entire time. He's awesome. And his new album is great. I'm hoping for a new Travis album too. They're definitely one of my favourite bands!!

I actually got to meet him last year (along with Andy Dunlop from the band) when they did this AWESOME show that was just the two of them going through their catalogue of songs throughout the years, talking about where they were as a band at the time and stories behind how some of the songs came about. It was one of the best shows I'd ever seen. And they hung around after to sell CDs & t-shirts and meet anyone who wanted to! They were total sweethearts and Fran actually took the picture of us with my phone:

Anyway, after that excellent performance, I booked it over to The Village Pourhouse (on Restaurant Row) for the CBLDF Comicon party. I had an awesome time there (helped by all my drinks being bought FOR me! hehe) hanging with all the comic peeps visiting, good friends new and old! As I had taken the day off on Friday, I had no problem staying out all night, I think I headed home around 3:30. I love walking through Time Sq. that late because it's the only time you see it empty. Freaks me out in a good way every time!

The big M&M screen is one of my favourite things in Times Square. :-P So awesome!

While I DID take off from the office on Friday, I actually had a 5-hour shift at the Marvel booth at the con. This ended up being the most time I spent at the actual convention (spent about 2 hours in artists' alley the next day, and that's it). I had a good time at the booth, the best part being the pictures with the Cap shield! :-)

After the con, my super cool awesome pal Joe took me to see the GORILLAZ!!!!! First we stopped over at 5 Guys Burgers & Fries for some delicious burgers (seriously, GO HERE). They have a little tack board where you can write/draw stuff and post it. This was my favourite one (only funny if you know about the terrible interenet sensation "Two Girls, One Cup" which I have never actually seen but have had described to me. I don't want to throw up...): 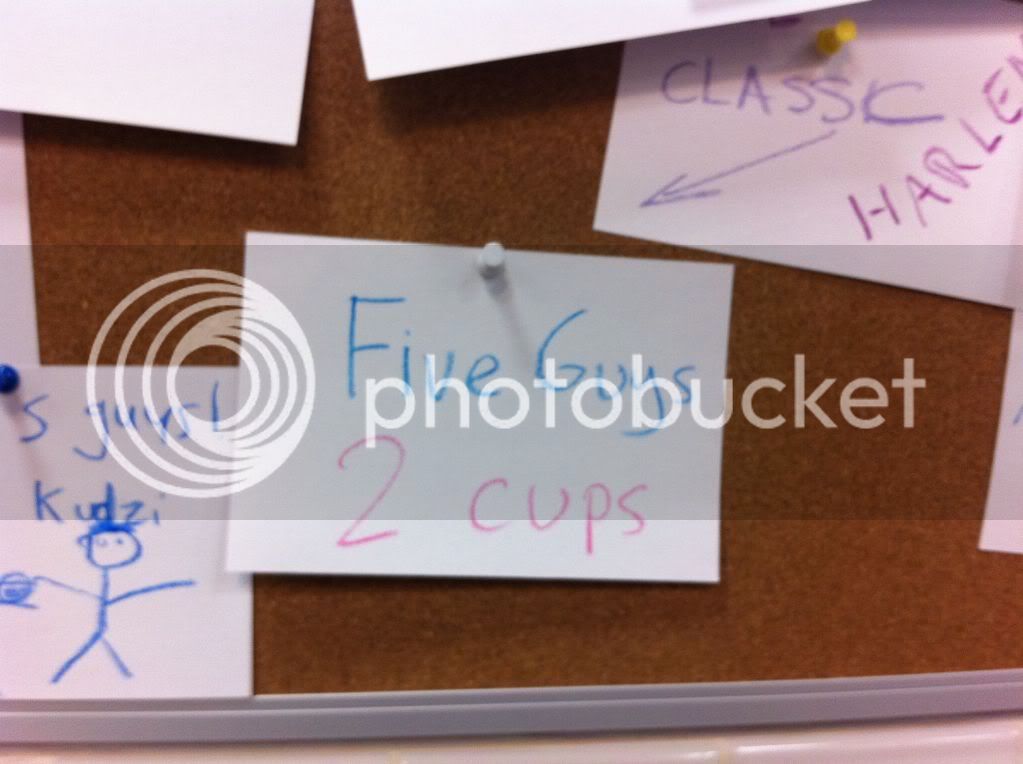 Anyway, the Gorillaz KICKED ASS!!!! They are touring with Mick Jones and Paul Simonon of the Clash! And they had special appearances by Mos Def & LOU FRIGGEN REED!!!

Snoop wasn't there, but they had a pre-recorded video of him on screen.

That's Lou Reed up front in the spotlight. I love the drawing of him they came up with.

So they basically had their videos playing up on that screen the whole time. It was pretty great. They were seriously amazing.

More good times drinking with Comicon peeps that night at The Irish Rogue. Ended up getting home probably around 4AM again, which meant I wasn't getting up until AT LEAST 12PM...


To be continued...
Posted by Jennifer Juniper at 2:33 PM