I've been wanting to post about this since July but I've been stupid and lazy, but a recent facebook post from a friend has spurred me into action.

OK, so I admit, before Exit Through the Gift Shop I knew nothing about Space Invader or any of the other awesome street artists out there (though I had passing knowledge of Banksy), but as I fell in love with Banksy I also fell in love with Space Invader. As I mentioned in my Exit blog, I know I used to see a Space Invader on a building along the West Side Highway. I would look for it every time I drove there and it made me happy every time but also very confused because I couldn't figure out why it was there. I thought it was maybe a sign from a store that had since closed. But now that I know it was put there by someone that just likes to put them there, it's even more awesome! Unfortunately, I haven't seen it since and I think it's been removed.

So, I've really wanted to find (& photograph) my own Space Invaders. I tried to figure out through his website where the ones in NYC are. I found one that was just by the Prince St. station but it too, was removed. I could still see the remnants (why anyone would feel the need to do this, is beyond me), so I decided to make it even more obvious and added a little note: 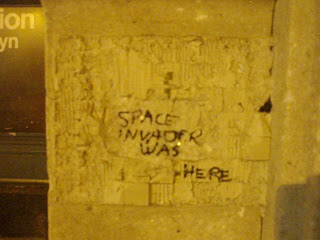 You can see there are still a couple of white tiles there and all the tile glue. Sigh. Like THIS is so much better to see than the space invader that was there.

Well! When I went to the San Diego Comic Con last year, a friend informed me of this awesome street art exhibit that was on display there at the time. So I made sure to go there (and the person behind the desk assumed I was a college student and let me go in for free! hehehehe). The exhibit was awesome but I couldn't take pictures. But I was told that Space Invader went around and put a bunch of his little guys in the neighborhood. I found a website that gave the locations of all of them so instead of spending time at the convention, I took a couple hours to walk around and find them, I think I got all but one that the website listed. Here they are! 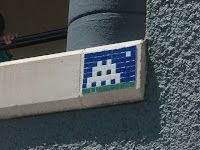 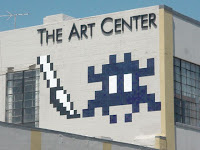 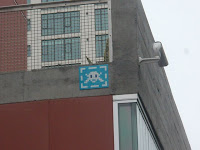 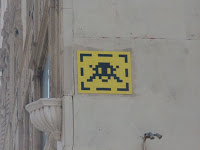 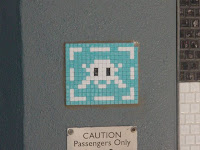 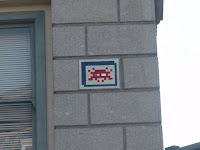 That last one is awesome because the eyes are mirrors so they look different from different angles!
Then on the last day I was explaining these guys to some other Marvel peeps at dinner and on the way back to the Hyatt, someone says "Hey Jen, is that the things you were talking about?" And sure enough it was! And it wasn't listed on the site so I was EXTRA excited! And I wrote down where it was in case anyone else wanted to find it: It was at Island St. & Front St. right by or on The Children's Museum! And here's a picture: 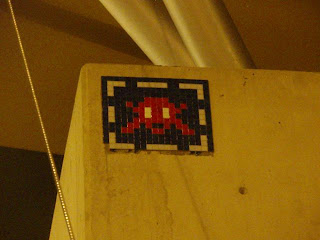 I've since tried to find one that I saw on his site near Queens Plaza but I had no luck. If you know where it is tell me! There's another that I think is on Northern Boulevard or thereabouts that I still have to get my ass to. AND what my friend posted on facebook was another one he saw in Williamsburg so I will have to be making a trip out there soon.
I just absolutely love these things. It's such a cool thing to do to spruce up a neighborhood! haha I just wish people didn't take them down! I mean, I know part of their charm is that they are not permanent but I love them!!! Man, if I saw one near my house I would freak out. And I would walk by it every day just to make myself smile.
So anyway Mr. Space Invader, if you see this, THANK YOU! :) And to everyone else, if you know where any of these are (particularly in NYC or even London since I'll be back there this fall), TELL ME!
The End.
Posted by Jennifer Juniper at 11:10 PM

Email ThisBlogThis!Share to TwitterShare to FacebookShare to Pinterest
Labels: art