I had a party the other night, during which I decided to have my friend Tara pierce my ear! I'd blame it on the car bombs, but no, this was premeditated, I'd asked her before she came. This wasn't one of those home piercings with like a safety pin and ice. I actually had a professional piercing kit with sterilised needle and Tara was once a professional body piercer. In fact, she did all but two of mine (OK, four, I wasn't counting my first pair or earrings I got when I was 7.)

Doing this at all, let alone with a house full of people, made me feel like a teenager again. Ha! I haven't gotten pierced in YEARS. I think my last one was my nose and I was probably 23... but most were done between the years of 18 & 20.

I took it like a trooper, according to Tara, the best I've handled it ever. Though, I remember the lower earlobes being the easiest to deal with, what with there being no cartilage. But as I've mentioned in my tattoo posts, I do tend to get sick. The worst one being my tongue ring, second piercing she'd given me after my belly. I instantly threw up in her hands (bless her) and passed out in her arms for a second before she was able to get me to the couch. haha What a wuss... But it didn't stop me from getting tons more. Anyway, here's some pics.

Notice the look of anguish. Seriously, though, do you see the industrial piercing I've got across the top of my ear. I did THAT, and yet I'm making this face over a regular piercing in the lobe. LAME. ;-) 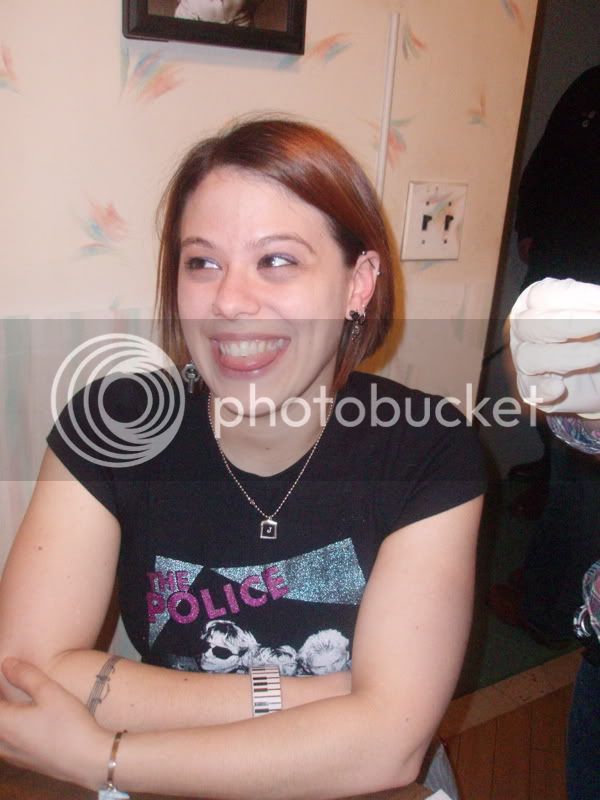 Man, Tara's hair is such a nice bright red... jealous... ;-) (She's actually got like three layers, red on top, blonde under that, then like black under THAT. Awesome.)

I still want ONE MORE earring. Another one on the top of my right ear (I've got two there). But cripes, that one's gonna hurt. Cartilage. Ugh. And if cleaning this one is any indication, that one's gonna hurt like balls. (Balls hurt?) First I'm going to let this heal up, then I'm going to get my hair done, THEN I'm going to ask Tara for one more. (My earrings get caught in hairdressers' combs all the time, I do NOT need a fresh one getting pulled...or getting dye in it. Ew.)

PS I notice the bottom of one of my kitchen pictures peeking out in these pics. One day I'll have to show you guys the collection of autographed photos I have hanging up in there... mostly bought on eBay, but two I acquired genuinely. :-)

PPS Thanks, Tara!!
Posted by Jennifer Juniper at 10:30 AM

I might get my Industrail Bar pierced , Does it hurt ?

I does indeed hurt! While I think they ALL hurt, the lower ears are very slight, but that bar was PAINFUL.

It's in your cartiladge, it's 14G (which is bigger than what one usually gets in the lobes) & it's TWICE!

First they pierce both points, then they have to pull the bar through both which ALSO hurts.

But then again...I'm a giant wuss when it comes to things things. But clearly I think it's worth it since I have so many piercings & tattoos! ;-) Good luck!!